Where we live in northern Pennsylvania, winter is some combination of snow, rain, muck and ice. We occasionally see some sunshine in there too!

Mud and ice make for miserable homesteading conditions. Whether it’s navigating steep and slick terrain to cut firewood, or taking care of livestock on icy mornings, opportunities abound for slipping and injury.

We’ve tried shoe spikes that we pull on and pull off, but they are clunky, expensive, and prone to jettisoning off our boots when we’re not looking, and I’ve got better things to do than search 25 acres of woods for a missing shoe spike, especially if that means hopping on the remaining spiked foot!

At our house, Muck Boots (what I like to call “homesteader flip-flops”) can be found in abundance. Since they cost so much, we hate to throw them out when we get a new pair.

Since we don’t need serious traction all the time, we’ve opted to turn our old much boots into Mad Max-styled, all-traction homesteading boots – and we’ve done so for very little investment. These things have some wicked-good traction!

The solution is simple and requires about 20 minutes, a bag of 1/2″ hex-head sheet metal screws, a screwdriver, and some old footwear (unless you don’t mind taking the screws out at winter’s end). Some slick surfaces for testing might also help.

We’ve found that hex heads work the best because there is a tiny lip around the edges that provides the bulk of the traction.

Notice the hex heads have a lip around the outside. This seems to make all the difference for traction. They’re like mini ice spike.

The process is simple. Using an appropriate screwdriver, just press slightly into the rubber sole of your boots and begin to turn the screwdriver. It will begin to bite into the rubber sole and once it does, just screw it in until the head of the screw comes to rest on the sole of the boot. There is no need to over-tighten. You’ll need to routinely replace an occasional screw as it is.

The effort is pretty minimal to get these to go into muck boot soles. Upon removing them, the holes are hardly noticeable.

Pick whatever pattern you want. This is how I have mine: 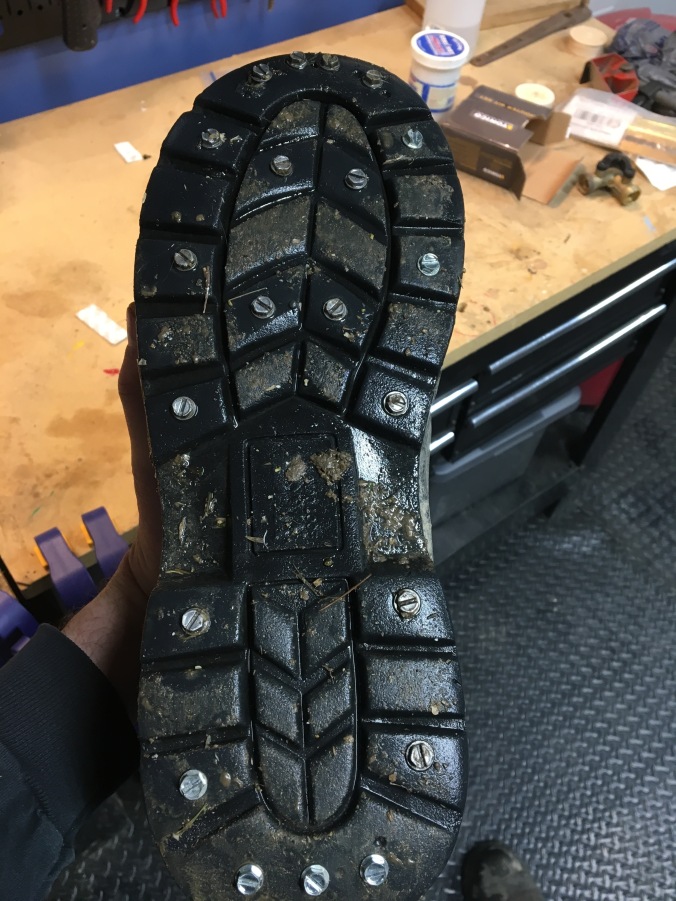 The pattern I use

These things are the bomb! We could run a sprint across a sheet of ice and not even think about slipping! Perfect for the icy days we encounter, and really helpful in most of the mud and muck we get as well!

You might be wondering… “will these poke through and stab my foot?” Well, we’ve not encountered that so far, even with kids boots. If you’re uncertain, start out by putting one or two in the heel and test it out. Proceed with a few more at a time, testing them along the way and see how they feel.

You might also be wondering… “will the holes let the water and muck into the boots?”. We’ve not encountered this yet. It doesn’t appear that the holes are deep enough for such, which is also why they probably cannot be felt.

You might consider adding in a glue of sorts of you’re super-concerned about water infiltration, or screws coming out. We’ve not felt the need but could see where it might be helpful.

Link in bio!
Ever wanted to clean your own chimney but the idea of climbing up a ladder and doing it yourself frightens the bejeezus out of you?
Zelda shares with viewers how we turn our leftover roasted chicken dinners into healthy, nutritious, and easy-to-make bone broth. Doing so, we're able to reduce our waste and use more of our pasture-raised chickens to feed our family. https://www.youtube.com/watch?v=Ybp7lFnvoJI
Sven speaks about pasture-raising Cornish Cross chickens using solar fence and fence chargers including some tips for troubleshooting low fence voltages.
Sven reviews the Fill-Rite FR211 fuel tank pump and speaks about why and how he will use it with a free fuel tank for gasoline storage on the homestead. https://www.youtube.com/watch?v=D32uLuv-4io
Zelda and Assy work to harvest some of the Eva potatoes grown in grow bags and encounter disappointing results. What was the cause? How should such times be handled? Is gardening always this discouraging? https://www.youtube.com/watch?v=UyZNWV7tKKw
Chickens/Poultry community DIY DIY Projects ecology Educational Electricity Emergency Preparedness Experiments Finances Food Preservation and Storage Food Storage Fossil Fuels Gardening Green Living Health and Wellness Homesteading Ideas Lowering Expenses micro-Farming Product Reviews Rants Recycling survival Sustainable Living Tips Tools & Gear Uncategorized Upcycling Utilities

Mentoring for Masculine Life and Relationships

Of Jots and Tittles
Primeval Pursuits